As stalemates go, this was perculiar in the fact that both teams wanted to the win the game and had more chances between them to win the game than any game in the Premier League this season. A stalemate is generally the result of two teams fearful of losing and denying space all over the pitch and not committing too many players in to attack in order to keep their defensive shape. However, a combination of poor composure in front of goal, resolute defending and a lack of patience ensured not one goal was scored (No mention of the onside disallowed goal here).

Blackpool almost returned to the side that played Everton with Southern dropping to the bench to be replaced by Grandin, setting Blackpool out in their now usual 4-2-1-3 / 4-2-3-1. With the introduction of Phillips, Taylor-Fletcher dropped deeper and more central and Blackpool formed in to a 4-2-4 which has become very common this season. West Ham set up in a rough 4-4-2 with some interchanging of position and one the front two dropping deep at times to form a 5 in midfield. Blackpool’s four band formation usually competes well against a three band system as they can exploit the space between the opposition lines. However, West Ham sat Parker and Noble deep at times to make their system more like 4-2-2-2 which helped to nullify Blackpool. This move from a formation point of view helped to contribute to the stalemate that ensued with the most space being created when attacks broke down and counter attacks were made.

Middle of the field

In midfield West Ham worked hard to deny Charlie Adam space, for the first 20 minutes this appeared to throw him off his game and in fact until his booking in the 27th minute he didn’t really make any positive passes and was generally pushed deeper and deeper by excellent pressure from Mark Noble and Scott Parker. The booking seemed to sharpen his mind and from then on, his range and effectiveness of pass increased with two passes getting in to the opposition box.

Before the game Scott Parker was talked about as West Ham’s key man and he didn’t disappoint, turning in an action packed display. He differs from Adam in that he is a complete midfielder and performs many roles. In  fact Parker, in addition to his 33 successful passes (joint with Noble for the most West Ham completed passes) chipped in with 5 succesful tackles, 2 interceptions and 6 blocks. Mark Noble wasn’t too far behind him with with a superb all round performance as well. With Parker and Noble denying him space, Adam played much deeper than West Ham’s key midfield duo. You can see how much deeper Charlie’s passing was compared to Scott Parker in the chalkboard below.

What was another key factor for West Ham in attempting to control of this game is the fact they were so dominant in the tackle winning 47 and losing only 19. When you break this down even more you can see that aerially West Ham were in complete control winning 18 headers to Blackpool’s 6. This is partly explained by the lack of height in the Blackpool side, but even those taller players in the centre back positions only won 2 of those 6. This gave West Ham an outlet going forward and territorial advantage to construct attacks.

This game saw clean sheets for both sides, but neither was down to a highly organised back line, some of the defending was desperate at times with lunges in to the tackle and last ditch blocking of shots. This was demonstrated with the amount of blocks each side had (22 in the entire game). Yes, this game will go down as having the most attempts on goal without a goal, but only 4 shots forced ‘keepers to make saves, something that both teams will take away from this game and seek to improve their composure in front of goal. 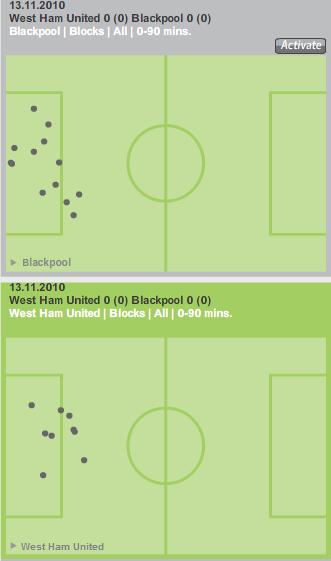 While the defences were performing resoltutely both attacks made it easy for them. As mentioned above through lack of composure and poor decision making but also from lack of patience in attack. Yes there were more shots at goals than you can shake a stick at, however, 14 of Blackpool’s shots came from outside the area and West Ham had 8 which accounted for 46% of all attempts on goal. Perhaps this showed a little desperation, trying to get a goal and shooting at all costs rather than retaining possession and finding a better position to shoot from.

Overall this was a difficult match to break down given the even spread of play, there were good passing moves and plenty of chances but composure and decision making were lacking at key times. Blackpool will be happiest with the draw and move on to tackling Wolves at Bloomfield Road next week. Ian Holloway will be hoping that if they carve out that many opportunities again added to some renewed composure (such as that seen again Wigan in week one) then Wolves will need to do some scoring of their own to take something from Bloomfield Road next Saturday.