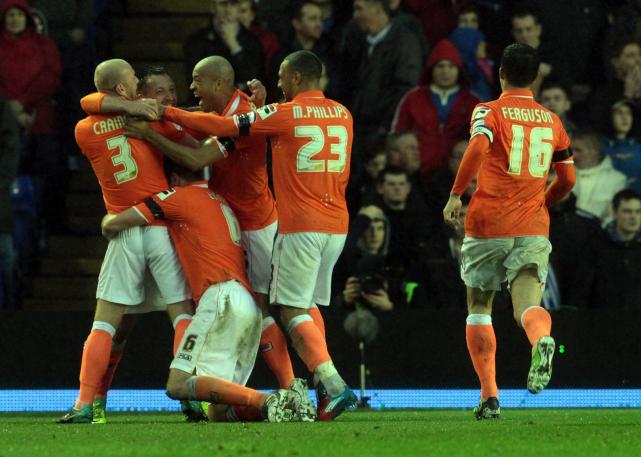 Blackpool beat Birmingham 3-2 on aggregate after a pulsating game at St Andrews on Wednesday night to reach the Championship playoff final at Wembley for the second time. Blackpool took a two goal lead on the night to extend their aggregate lead from the first leg to 3-0 before Birmingham finished strongly to pull two goals back and kept pushing to the end only to fall just short.

Over the two legs there were a set of factors that could be deemed as being critical in Blackpool’s victory as well as elements that led to Birmingham coming back in to the game. The factors are outlined below and are in no order of priority nor are they exhaustive. This takes in to account both legs as a combined match lasting 180 minutes. The structure of the game was roughly as follows. The first 20 minutes was an even affair before Blackpool dominated for the next  120 minutes, then Birmingham dominated for 30 minutes before a relatively even last 10 minutes.

As discussed in the preview Ian Holloway had a key decision to make in the midfield having to choose between the technical and positional qualities of Barry Ferguson or the more dynamic running and physicality of Keith Southern. Holloway opted for the former and without a doubt the composure on the ball of Ferguson in alliance with Angel Martinez was pivotal. Martinez and Ferguson formed a great central midfield unit based firstly on reclaiming possession from loose and ‘second balls’ giving Blackpool vital possession of the football. This was neatly done through keen anticipation, timing and superb positioning. So much so that Chris Hughton made a late change in the first leg to bring Jonathon Spector in to the central midfield area to stem Blackpool’s flow.

The impact of this dynamic was that Blackpool had a solid platform to attack from and supply their wide men. Also, given that Birmingham play a long ball game there was a lot of loose balls to be picked up on and Birmingham were consistently second best to them. In addition to this Blackpool were able to play comfortably from the back through the midfield and on to the attack. Essentially the pattern for large parts of both legs was; Birmingham long ball from the back, Blackpool win the defensive header, Blackpool’s midfield seize on the loose ball and attack.

What was clearly noticeable was the difference between the two teams in their application off the ball. Blackpool were consistent in pressing high up the pitch for large parts of the game, with a slight drop as Birmingham dominated in the second half of the second leg. Birmingham however, started pressing brightly in the first leg, but dropped after about 20 minutes and Blackpool moved the ball through their midfield effectively. They were then sporadic in their pressing for the rest of the tie. In particular the selection of Spector to start the second leg appeared to place Birmingham at a disadvantage as more often that not he tended to sit off the Blackpool midfield with Jordan Mutch being the lone midfielder who tried to press. As a counterpoint to this the introduction of Guirane N’Daw just before half time in the second leg saw Birmingham pressure Blackpool much more effectively as he stepped out consistently to hassle the Blackpool central midfield. If anything the even finish to the game potentially owed a lot to the fact the N’Daw was virtually added to the attack removing him from the area in which he was operating effectively.

One of the critical elements of the tie was the ability of Blackpool to get behind the Birmingham defence and although they did defend well for large periods, they lacked defensive coherency at some critical moments. On the other hand Blackpool appeared to win the large majority of their defensive duels. In particular Ian Evatt dominated his opponent for pretty much the full 180 minutes. In the air he was imperious and on the occasion he was slack on the ground King was unable to convert when it mattered.

Blackpool have played a high defensive line for large parts of their time under Ian Holloway. In addition to this they also attempt to utilise an offside trap as a method of snuffing out attacks before they fully develop. There are several examples of how Blackpool have got their offside trap wrong over the past few seasons, but with the exception of the Nikola Žigić goal they executed it to perfection here. Not having the stats at hand is an issue, but as an estimate, Birmingham were caught offside around 14 times across both legs with the majority due to Marlon King’s impatience and inability to hold and time his runs. Arguably a well constructed offside trap is the pinnacle of defensive work and should it be executed well it needs intelligent play from the attacking side to neutralise it.

Chris Burke is no doubt a superb player and can change matches as proved here, the problem for Birmingham is that they lacked balance in their point of attack. Too often than not they tried to channel their attacks through Burke’s right flank. Essentially Blackpool knew if they could cut supply to Burke or handle him in possession then they’d neuter Birmingham to a great degree. In the first leg, Burke saw very little of the ball, when he finally saw the ball in the second leg and was given adequate support to work overloads and overlaps he became a threat. In addition to this Blackpool allowed him to waltz inside far too often. From an attacking point of view Burke was the best player of the second leg. This was further backed up as Birmingham fired in to life it was sparked by a keenly timed pass through to Žigić which was then followed by persistent feeding of Burke down the right hand channel due to the aforementioned better pressure from Birmingham through N’Daw.

Blackpool will travel to Wembley to meet West Ham a side who have unpicked Blackpool at will in their two meetings this season. Sam Allardyce will set out to gain an early advantage and then seek to efficiently deconstruct Blackpool through well-timed attacks. However, Blackpool are a different side to when these two last met and on a one-off occasion, with a manager and team that Blackpool possess, absolutely anything could happen. What is safe to say is that Blackpool has another side to be proud of and a season packed full of memories that can be added to the catalogue that has been built up over the past three seasons.

19 thoughts on “How did Blackpool beat Birmingham?”