Neither side came in to this game in good form, but both sides put together a lively encounter which either team could have won. The game dynamic changed three times due to the deployment of Rafael van der Vaart with a final twist to the game coming as Blackpool tried to close out the game. 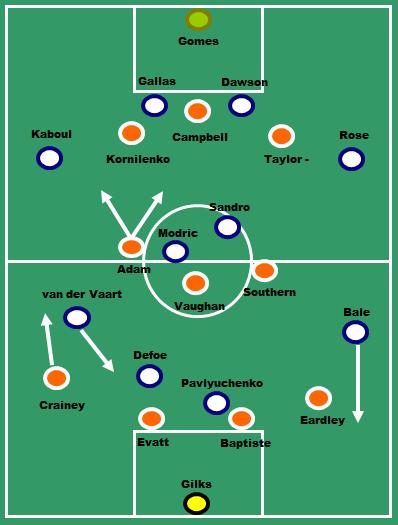 Ian Holloway made one change from the Stoke game, dropping Matthew Phillips to the bench to be replaced by Sergei Kornilenko. Harry Redknapp made bold selections in his starting eleven, with Danny Rose coming in at left back so that he could keep Gareth Bale in the more advanced position down the left. Aaron Lennon was dropped to the bench and van der Vaart started on the right flank. The early passages of Spurs’ play tended to gravitate to the right and Younes Kaboul overlapped a number of times as van der Vaart drifted inside. The Dutchman didn’t play as an orthodox winger and seemed to have a free-ish role. However, only once play started to break for Spurs down their left did they genuinely seem to threaten Blackpool. Other than that Spurs appeared to try to catch out Blackpool’s high line with occasional through balls down the middle, but Blackpool anticipated well and they enjoyed little success.

Luka Modric  was at the heart of some good periods of play for Spurs by keeping the ball moving quickly and from flank to flank to avoid the centre where Spurs where outnumbered 3 v 2. As the half went on Blackpool’s midfield pressed hard (mainly through Keith Southern), passed better and tried to break at speed. However, the first touch of the Blackpool forward line, especially Kornilenko was poor and attacks broke down more often than not.

By bringing on Aaron Lennon in the second half  Spurs had fast and direct attacking options on both flanks and this meant that van der Vaart was pushed centrally. He started to go untracked through the middle and found himself in an excellent position only for his touch to let him down under pressure. Spurs found a good rhythm and created seven chances in the first fifteen minutes of the second half compared to the 10 in the whole of the first half. Modric started to break more from midfield as he had van der Vaart dropping back to cover. Modric dominated the game and was outstanding, not only with his passing but consistently found space and took men out of the game with deft flicks and dribbles. Added to this Lennon gave more incision down the right and the balance to Spurs’ attacks was excellent, giving them options and variety which Blackpool had to defend well in order to shut them out.

Playing out alongside this Ian Holloway had sought to resolve his side’s attacking problems by introducing Jason Puncheon at half time for Kornilenko and he appeared to have a better awareness on and off the ball. Added to this his first touch was more reliable and Blackpool’s attacks became more fluid.

The injury that Gareth Bale sustained meant that Redknapp decided to move van der Vaart to the left whilst Peter Crouch came on as Spurs moulded back in to their 4-4-2. This appeared to stunt Spurs’ midfield play, there were left with more 2 v 3 situations in the centre as van der Vaart moved wide and he really struggled to assert any quality on the game from that position. Blackpool gained their own foothold in the game, again their midfield were working really hard to close Spurs’ down and trying to break at speed and as their forwards looked more cohesive off the ball and confident on it, they started to carve out more chances.

Once Blackpool had scored, the final part of the game played out with Spurs throwing everything at Blackpool and in doing so the game broke down in to a final scrap van der Vaart wasn’t involved in the game as much now as Spurs’ best chances came from Lennon and Modric creating or from Peter Crouch knock downs. Ian Holloway made a strange substitution in bringing on Craig Cathcart and moving Neil Eardley to right wing in to almost a 4-5-1, but once the Spurs’ goal went in and realising the aerial danger of Peter Crouch, he seemed to try to counter that by bringing James Beattie on for the sole purpose of marking Crouch at pieces and for high balls in to the box.

Tottenham controlled a lot of this game and had Blackpool not defended well and broke as purposefully as they did then the pressure may have been too much for them. However, for Harry Redknapp the utilisation of van der Vaart appears to be strange given his quality through the centre of the pitch and keeping him there in this game may have proved to be decisive. At times Blackpool sparked in to life and fizzed the ball in their passing movements once again. Heading in to the Bolton game on Saturday they will hope to sustain the movement from the forwards in the second half in addition to good midfield combinations to push Bolton very hard. Should they do that then they may be within a point from safety come their final game at Old Trafford.