By now everyone knows how this match panned out. Both sides made errors that were punished and West Brom claimed the 3 points. However, what went on from a formation point of view and how did that affect the match as the 90 minutes unfolded?

Roberto Di Matteo uses a 4-1-4-1 which sometimes evolves into a 4-3-3 depending on the progressive approach of Jerome Thomas and Chris Brunt, whereas Ian Holloway favours his variant 4-3-3 that evolves in to a 4-2-3-1 or sometimes a 4-2-1-3.

Blackpool lead after 30 mins and as you can see above, the defensive line is sitting deep and the team in midfield are bunched close together closing out the space affording to the West Brom midfield. Whilst below you can see how West Brom played marginally higher up the pitch and resembled something more like a flat 4-4-2.

As West Brom drew level Blackpool’s formation had started to spread wider than before and Taylor-Fletcher (number 12) has dropped back in to midfield. On the other hand West Brom have got marginally more adventurous with Marek Cech (4) pushing higher up. However, in midfield Youssuf Mulumbu (21) has started to move deeper and Chris Brunt has moved inside more, presumably to assist his colleagues in midfield.

At half time Blackpool are the more compact of the two team whilst West Brom have their defence playing slightly higher and the whole team almost spread box to box. The compact nature of Blackpool’s formation might be a reflection of the fact that after initially having some joy in the game, they started to soak up some pressure and reverted to using the counter attack to break down West Brom. 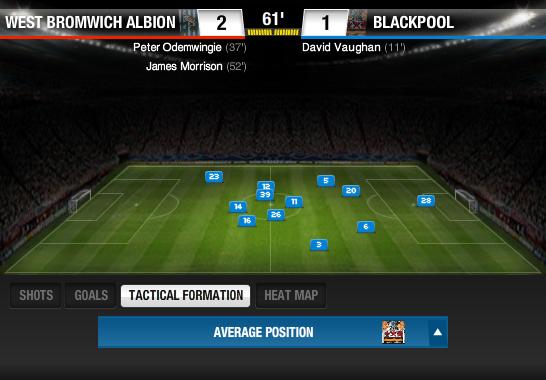 Blackpool at this point had fallen behind and Matty Phillips (23) had been introduced for Elliot Grandin (14). Given that Grandin was the further player forward when he departed might have been a reason for his withdrawal from the game as well as his fitness level. Perhaps he was instructed to push higher up, but you’d have expected DJ Campbell to have been in his position. Perhaps DJ was dropping too deep at times? Below West Brom are starting to look more consistent as Mulumbu forms a line with his full backs, he sits as the rest of the team progress. Di Matteo has a clear definition of his team, 5 players with defensive duties and 5 with attacking duties which strikes a good balance on the pitch. 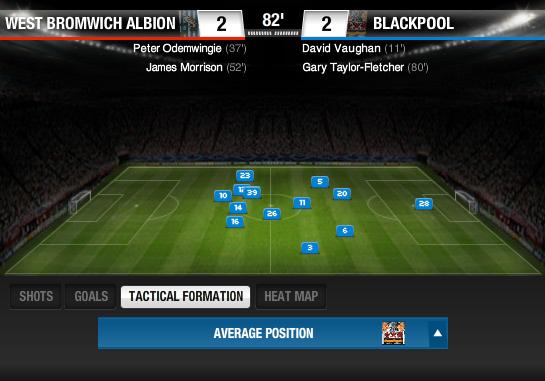 By this point Ian Holloway had gone searching for the game and made brave attacking substitutions. David Vaughan (11) started to drop deep to afford the side some cover, Charlie Adam (26) now standing alone in midfield as DJ Campbell (39) and Taylor-Fletcher start to advance forward in search of the goal. Below West Brom are very orderly, which was important in the scheme of things as they haven’t necessarily been drawn in to Ian Holloway’s plan to throw attackers on the pitch to open the game up. Their defensive 5 have barely moved in all the second half. 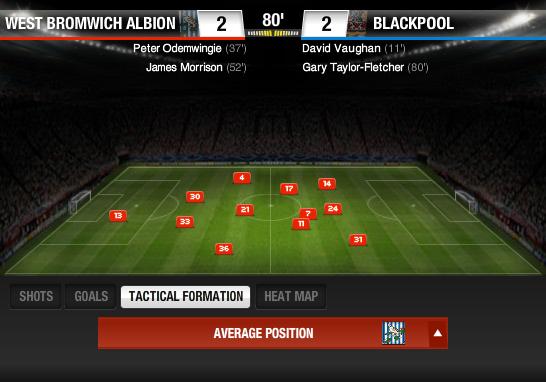 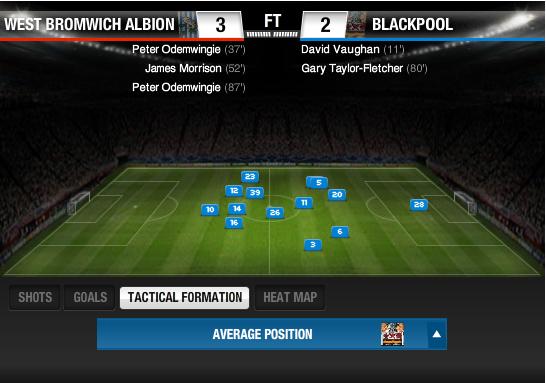 More of the same as Blackpool advance forward playing their attacking football, however, what is interesting to note between this shot and the opening shot on 31 mins is the defensive line. Check back and notice how Craig Cathcart (20) and Ian Evatt (6) are higher up the pitch. Look at the half time positions and see how Cathcart was on the ‘D’ of the penalty box. Would Cathcart have been caught out by Scharner’s clog had he been sitting deeper as earlier? Below West Brom remain steadfast in defence whilst all around them is attacking chaos. The key here is Mulumbu again, who has maintained his positional discipline since his opening half hour digression. 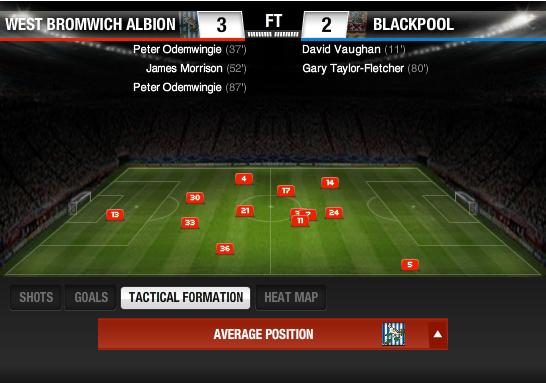 Closing out and signing off

Yes this was a great game for entertainment, Ian Holloway certainly did everything he could to win this. Blackpool did superbly to get back on level terms, but after making attacking substitutions it is hard to try to alter a teams mentality so late in the game. West Brom kept tight and kept their shape and saw off the best that Blackpool could throw at them and fittingly Peter Odemwingie kept his composure to close out the match.