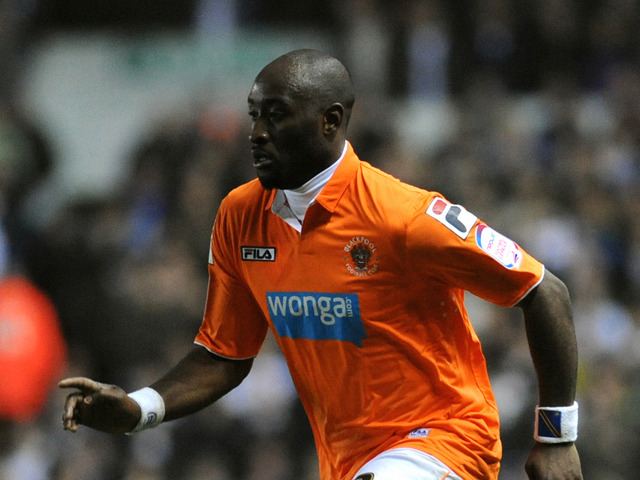 At the start of the season TD took a look at the Blackpool squad and made a few assessments of where Blackpool may look to strengthen and why. Now we are in January it’s time to see how the squad looks and where Ian Holloway may look to recruit.

Let’s define the Blackpool squad for the purposes of this article.

It is also important to outline how this squad has been comprised. Rather than list everyone on the books, a few reasonable assumptions have been made to whittle the squad down to what could be described as the first team squad. Those assumptions include deleting Bojan Djordjic from the squad due to the fact he hasn’t been near the subs bench since the Crystal Palace game back in September and it’s unlikely he’ll get a start for the club in a league game. One player in a similar situation to Bojan is Gerardo Bruna, however, he has played in a league game and may yet feature in the second half of the season and has been included, for now.

Another assumption is to remove any players who are on loan to other clubs. Players such as Adam Dodd and Liam Thomsett are at Altringham and unlikely to come back and feature in the squad. Added to this the likes of Daniel Bogdanovic and Brett Ormerod are out on loan at Rochdale and may well not come back to the club given their age and desire to be playing week in week out especially as forwards are in abundance at Bloomfield Road. Also not included are the younger players enjoying good loan spells such as Ashley Eastham and Tom Barkhuizen and players such as Miguel Llera who has just returned from Brentford.

Loans have featured heavily in Blackpool’s incoming player list and the likes of Jonjo Shelvey and Callum McManaman have also been discounted here. Both may return, but at the moment their parent clubs want them in and around their first team squads. On the flipside Danny Wilson coming in from Liverpool has been included here as he is set to stay for the second half of the season.

In the first half of the season two players deserve recognition as they are new additions and have contributed positively to Blackpool’s season. Firstly, there is Mark Howard who has deputised in the absence of Matt Gilks and proved to be a very able ‘keeper. Should Gilks be out for a lengthy period of time then Blackpool appear to have dependable back up in place. Secondly, Lomano LuaLua has come in to the forward line scoring three goals and injecting some vibrancy and unpredictability to Blackpool’s attacking play.

The foundation for these squad evaluations has been to assess the age and positional profiles based on some guidelines listed in the original post. Roughly speaking the squad should comprise twenty four players, the current squad numbers twenty three. You can see below how the age of the squad compares against the quotas for each age bracket. 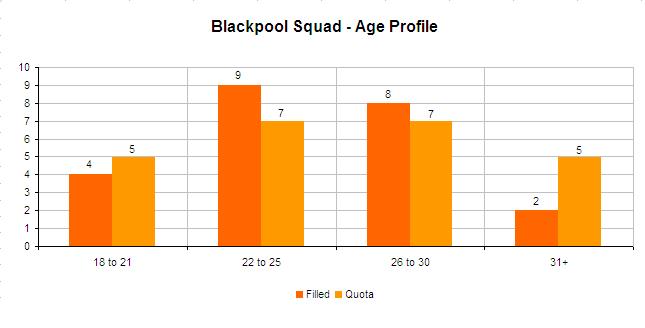 The key observation to make here is with the departures of Ormerod & Bogdanovic the squad seems short in the more experienced bracket and there’s a general imbalance from an age perspective across the squad. However, that may not be too bad given the likes of Stephen Crainey, Gary Taylor-Fletcher and Ian Evatt are close to stepping into that bracket. Therefore, recruitment may be focused on the 26 to 30 bracket or otherwise the squad may be a little young moving in to next season and lacking players in their ‘prime’.

From a positional point of view things appear much easier to point out. 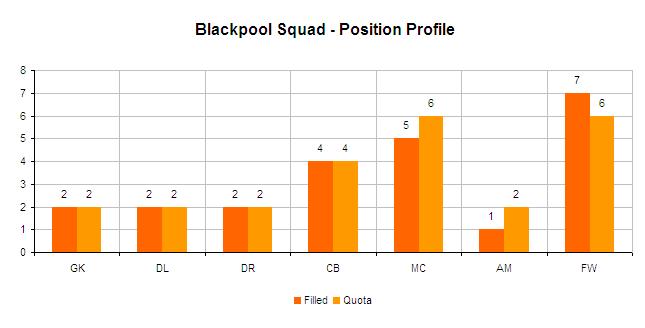 It appears that the defensive positions are filled up and the forward line is oversubscribed, but the midfield appears a little short. A pre-season article speculated that a left side centre back might be targeted and with the loan of Danny Wilson that gap appears to be filled now. Using the same logic a midfielder may be sought and possibly an attacking one. Essentially it’s a gap that Shelvey was filling and should Liverpool not allow him to return then Holloway will have to look elsewhere. Added to this Holloway may be mindful of the age of any new recruit and might target a player in his prime, however, it’s likely that player will not come cheap and may have to be loaned.

January may well bring some new faces, but it may also bring about some departures. Ian Holloway has already suggested that Premier League teams are looking at some of his players. Who they are hasn’t be openly discussed but it’s no secret that both Matt Gilks and Alex Baptiste are enjoying fine seasons and Matt Phillips’ recent form will have alerted some clubs. If any of those players leave then that it would be remiss of the club not to replace immediately.

What this window brings remains to be seen. Players will be brought in and it’s crucial that those players are additions to fill gaps and bring genuine quality to the squad and that Ian Holloway doesn’t have to search for replacements for key players departing. It’s no secret that Blackpool struggled to recruit the kind of players they wanted last January, however, as with the previous deadline, being in the Championship still allows the club to bring in loan players after the window closes at the end of January. Key last time out in the Championship was the late addition of key loans, it wouldn’t be a shock if it was the same this time, the same outcome would be some achievement.