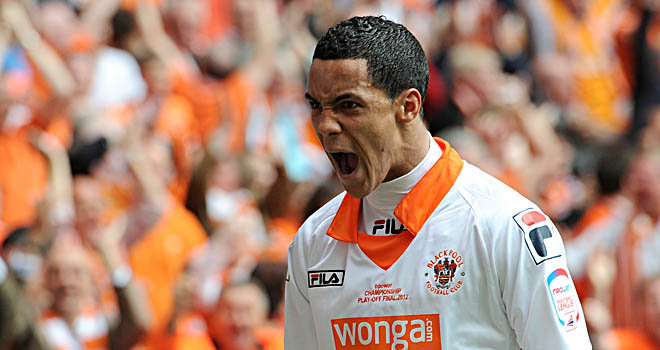 Blackpool conceded a two goal advantage before coming from behind yet again this season to secure a third draw in three games since Michael Appleton took over the managerial role at Bloomfield Road. Michael Appleton chose to preserve the 4-3-3 formation from the Ian Holloway era whilst Gianfranco Zola opted for a 3-5-2. Appleton’s biggest selection issue was caused with the injury to Ian Evatt. Kirk Broadfoot came in to the side at right back with Alex Baptiste moving to centre back.

For Watford Matěj Vydra started up front with Troy Deeney supported by Nathaniel Chalobah sat in the centre of midfield with Mark Yeates on the right and Cristian Battocchio on the left, although their positions were fluid. Ikechi Anya & Daniel Pudil operated as wing backs whilst the back three comprised of Fitz Hall being flanked by Tommie Hoban on the left and Joel Ekstrand on the right.

Effectively Watford’s game plan was to sit and counter attack getting eight men behind the ball when out of possession as their 3-5-2 became a 5-3-2. Their counter attacks sought to exploit the flanks with Vydra drifting out wide left looking to combine with support from Pudil. They were happy for Blackpool to control the possession which allowed Blackpool to play a similar game to their time under Ian Holloway. If anything, the main difference was that Blackpool’s full backs stayed a little deeper presumably to ensure that they weren’t exposed to counter attacks. If one attacked, the other hung back a little.

The first half was characterised by slow, sloppy play by Blackpool who struggled to do anything with the ball, whilst Watford stung for the first goal with an exceptional counter attack from a Blackpool corner. It appeared a clear plan as the right back Anya positioned himself on the left of the box to use his pace to make a box to box run via space created by Blackpool’s over committal at the set piece. In all it took around twelve seconds for the ball to get from Manuel Almunia’s hands in to the back of the Blackpool goal. The second Watford goal was the product of a defensive error which was seized upon by Deeney, who was arguably in an off-side position.

Apart from Watford’s counter attacking the game was characterised by two key substitutions made by Appleton which eventually lead to Blackpool dominating the second half. Elliot Grandin, didn’t exploit space behind the forwards or show enough for the ball. Appleton took him off after a half hour introducing Tiago Gomes. Tiago offered a little more impetus, playing through balls and joining in with the forwards.

At half time Ludovic Sylvestre made way for Isaiah Osbourne which led to two holding style midfielders with Basham supporting the forwards a little. Sylvestre is excellent in possession and combining with players in the middle third, but at times he fears taking risks in the final third added to the fact that off the ball he rarely attempts to run beyond the forward line to support attacks.

In games where Blackpool become bogged down he is less effective than when he comes on as a substitute with Blackpool trailing. In that scenario he brings a calmness that allows Blackpool to gain a foothold in a game that is in danger of getting away with them. It might be that he is used more in that way over the next few weeks. Osbourne on the other hand was quick to regain possession, put in a few challenges that unsettled the Watford midfield and forced their midfielders to hurry up and eventually waste possession.

These changes for Pool effectively changed the outlook of the game. Both bringing more a more dynamic edge, whilst they impacted on Watford who went deeper and deeper trying to shut out space and see the game out. In fact they possibly got too deep. In the first half they played a reasonably high line and play was condensed, which arguably contributed to the scrappy nature of the game.

Watford certainly look a good side. They have some clear patterns of play, that although didn’t contribute too much in that game will certainly cause teams trouble, if they haven’t already. One particularly interesting pattern of play appeared to be determined to stretch the play quickly and throw a team out of balance. Essentially, this consisted of a ball out to the left back (Pudil) who hits a quick diagonal out wide right.  As mentioned earlier the movement of Vydra was also of interest as he drifted wide left and slightly deep looking for combinations out wide. He was hard to track in the first half at times, however, the second half Alex Baptiste appeared to read him much better and realised that he had to engage his physically in order to stunt the attacks.

Arguably the biggest issue in the first half aside from anything previously mentioned was the forced reorganisation at right back for Blackpool. Kirk Broadfoot isn’t a naturally dynamic right back which Blackpool need and his first touch was poor at times which removed the right side of the pitch as a clear attacking threat. This is of particular importance for Blackpool given that the right back needs to build a good understanding with Tom Ince in order to accentuate his ability and help Ince get one on one with the opposition full back. That was even more important in this game given Watford double and even trebled up on Ince to shut him out. However, he grew in to the role and as Appleton asked both full backs to step up in the second half his role was crucial in initiating the moves for both goals.

For Watford the big question for them moving forward will be whether they learn from losing this two goal lead. Zola’s post match comments appear to suggest he thought the game was theirs by half-time. They didn’t need to get so reactive after going two up and to continue to counter. Whilst Blackpool were in their malaise they could have stepped up and tried to dominate possession and could have looked to kill off the game. It would be a surprise to see them take the same approach again, should the event arise. However, this was an away game and it made some sense to sit back, at home they may well have put the game to bed earlier and made the third goal.

Although he’s hardly an unknown quantity, the 17-year-old Chalobah deserves a special mention. Clichés could rule the day here, but he certainly didn’t play like someone so young. In the first half his positional awareness was exemplary, never getting caught too high up the pitch and placed well to seize upon loose balls. His first touch is lovely and he has the ability to recycle the ball under pressure as well as spreading the play when needed. It was Blackpool storming second half that appeared to overwhelm him till around the 75th minute when a few strong challenges got him annoyed and he appear to channel that anger in to a sharpened focus, playing a couple of lovely medium range passes to add depth to Watford’s play, as well as getting away a long-range shot. Breaking through at Chelsea will be tough, however, provided his growth doesn’t impact on his coordination he may well push for a place in the Chelsea first team moving in to next season. He’s that good.

This was a game characterised by a sloppy Blackpool who are clearly learning new things under a new manager, whilst Watford attacked at pace and perhaps should have tried to kill the game off whilst they had a chance. Watford will keep ticking away as they are doing and have an outside chance of making the playoffs, as have Blackpool. Arguably the best of these two teams may not been seen till February or March, between now and then it will be a case of keeping in touch with the playoff pack.