Continuing on from part one, I shall pick out my key observations from the next four games.

Holloway admitted an error in picking Alex Baptiste in a defensive midfield role, a total diversion in tactics and a move that failed to pay off. The formation reverted to the usual 4-3-3 in the second half and gradually Blackpool played more coherent football. In playing Baptiste in the defensive midfield role, Holloway would have hoped to to see Baptiste breaking up Chelsea in our half. However, a quick look at his interceptions and tackles proves that the gamble never paid off. One interception out wide right and one tackle won. 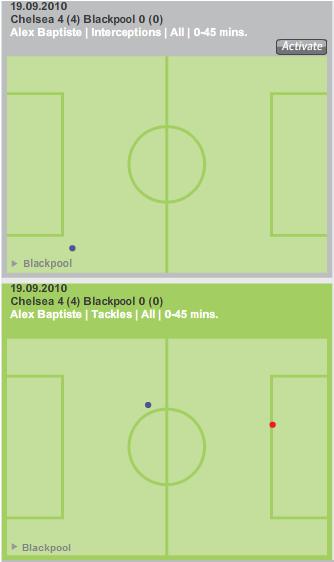 It was a frustrating day all round and the less said about Charlie Adam’s own goal the better. However, one thing that Sam Allardyce is very adept at is getting his teams to work hard to ensure that the opposition play in to their strengths. This can be perfectly illustrated by taking a look at the passes delivered in to the Blackburn box. They want you to cross as they will no doubt (in most cases) win the aerial battle. Looking at Blackpool’s crosses in that game, note how many were unsuccessful and also what poor angles they were hit from. Not one came in from the byline. Blackburn can defend this play all day long with Nelsen and Samba commanding serious aerial respect ensuring that only a quarter of Blackpool’s crosses hit the target. 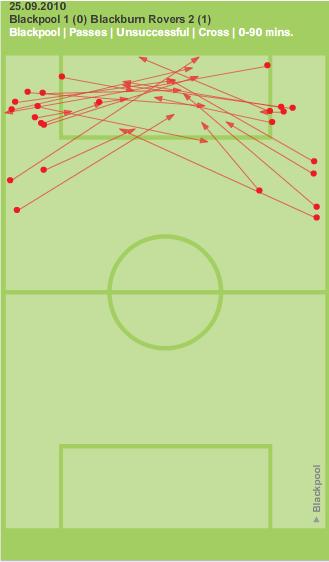 Going to Anfield and dominating the first half hour of a game is something very rare. Blackpool went and did that, Liverpool on the back of a Europa league game were somewhat put in to the shade by a dominant passing display in the first half an hour which culminated in Charlie Adam’s converted penalty. Here you can see the passing comparison between the two teams, Liverpool completed only 82% of their passes whilst Blackpool not only had more passes (132) than Liverpool, but completed 92% of them. 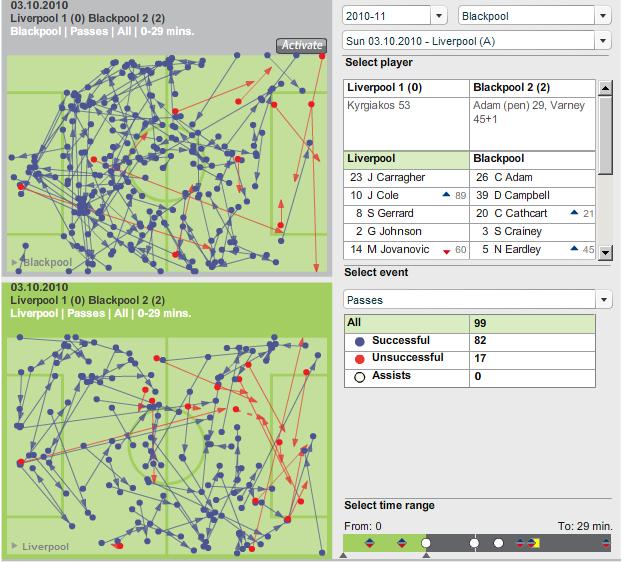 Another interesting point about the Liverpool victory is the way that Liverpool favoured their attacks to the right flank with Gerrard and Johnson pushing the play down the right, whilst Blackpool structured their attacks down the left. Was this a ploy to exploit the gaps left by Johnson at the back. Certainly the move leading up to the penalty would suggest that. 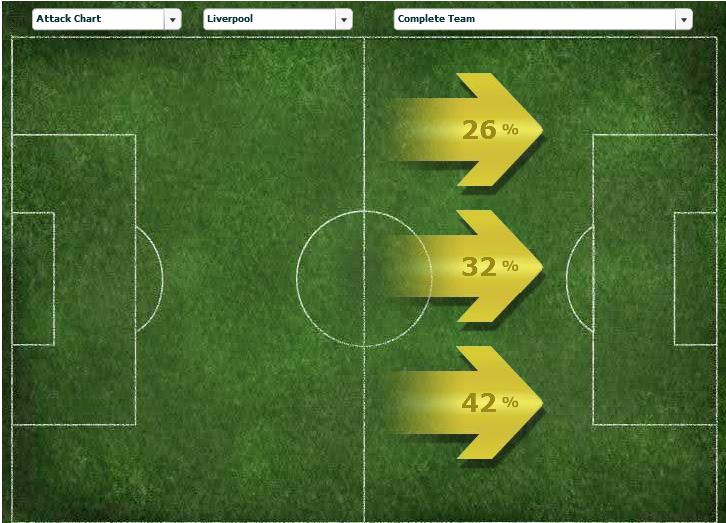 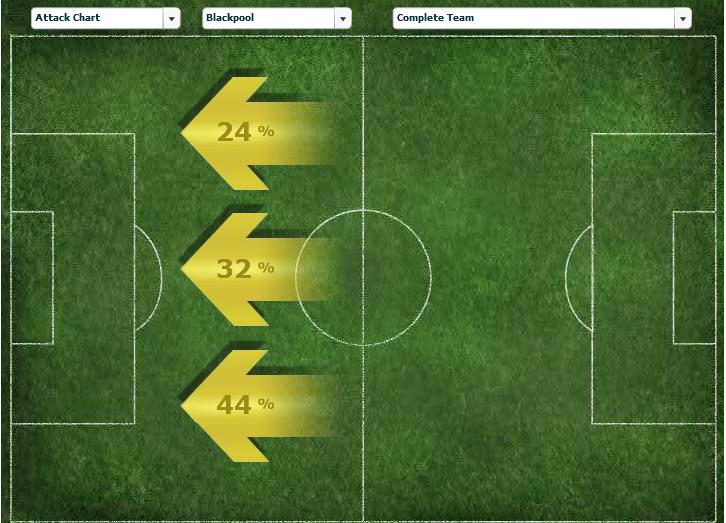 Much can be said about poor refereeing decisions, however, bringing on a world cup winning creative midfielder whom it is rumoured they paid £29m for is going to help give your side an advantage. Silva came on and floated between Blackpool’s lines and ensured that ball was played in to the Blackpool box. Getting the ball in to City’s box proved more difficult and for all Blackpool’s passing, not one pass from open play made it in to the City box. The only box activity you see here are passes out of the box. If Blackpool are to beat teams, they must start getting their passes in to the opposition boxes especially as DJ Campbell tends to thrive off balls in to the box (there’s a post coming about this). 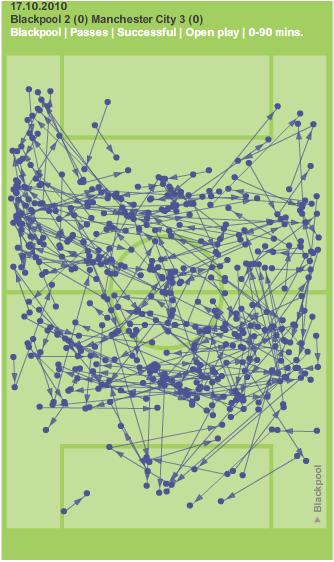 There you have it. Blackpool’s first eight Premiership games giving an idea of the factors that could have proved decisive in each game. What is sure about Premiership football is that Blackpool aren’t totally out of their depth and we as fans can tinker with great tools such as Guardian Chalkboards to analyse our matches. I wonder what the passing charts would’ve looked like if we had this available during Worthington’s tenure?

After my first match report from the Birmingham game, I want to run through the previous eight games picking out my key observations from each game to give an insight in to why I think we won, lost or drew the games.

Blackpool have started the season admirably and have already scored some memorable victories, should this start be sustained then survival in the Premiership may become a reality.

The season started with a match up against a Wigan team under the stewardship of Roberto Martinez whom Holloway learned a lot from during his sabbatical. However, Martinez will have learned that taking your chances is a crucial part of winning football matches. Looking at the chalkboard below you can see that Wigan generated the most chances, but Blackpool took the points as they converted four of them. Wigan could point to a poor performance from Chris Kirkland as the reason for this as he endured an awful game at the Dee Dubya. 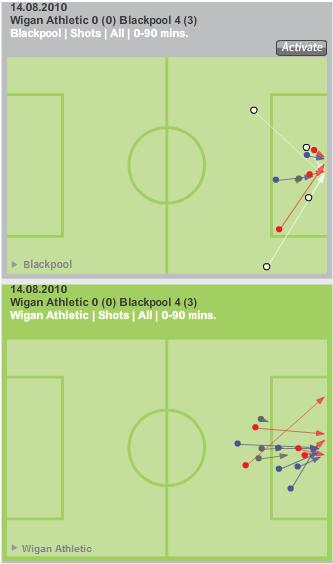 Hard to put much down about this performance that hasn’t already been said. Going down to ten men so early in a game (31 mins) against one of Europe’s best sides is only going to lead to one outcome. That we all know. However, up until the sending off a look at the passing stats shows that Blackpool were certainly seeing as much of the ball as Arsenal with 129 successful passes to Arsenal’s 138. 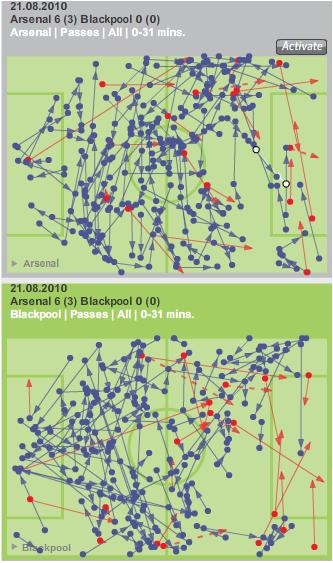 Premiership football came to Bloomers with a pulsating game that was marked by Luke Varney’s inspirational debut. Blackpool’s passing was focused down the left hand side of the pitch that Varney occupied with the majority of the passing in the final third coming through the left side. Added to this Varney was fearless when it came to shooting accounting for seven of Blackpool’s sixteen shots throughout the match, Ormerod on the right side got one unsuccessful shot away. A look at Blackpool’s attacking chart again shows how much of the play was focused through the left. Oh, and Varney scored one and forced an own goal. Not a bad debut, and one that inspired the players around him to gravitate the play around him. 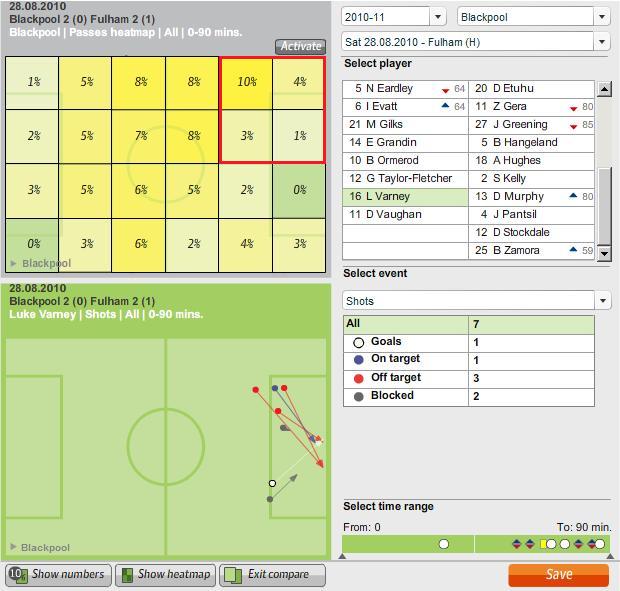 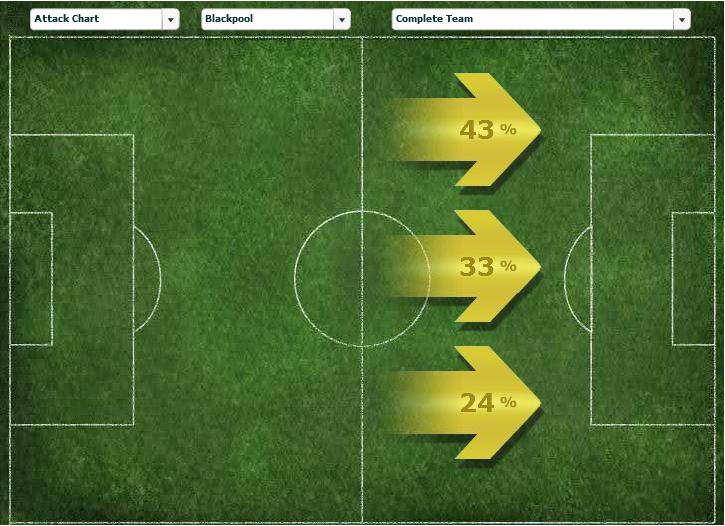 A great result for Blackpool, some great passing moves and breakaways. Newcastle seemed to rely on the high ball to Andy Carroll who played at the head of a 4-4-1-1 formation, however, Kevin Nolan was expected to feed off Carroll’s headers and set up attacking plays. You can see the problem here, Nolan was largely wasteful in possession. Blackpool knew that if Carroll was to win his aerial duels that they would have to be quick to intercept the ball when it came down, you can see that Blackpool made 50% of their interceptions in the zone that you’d have expected Nolan to be operating in. 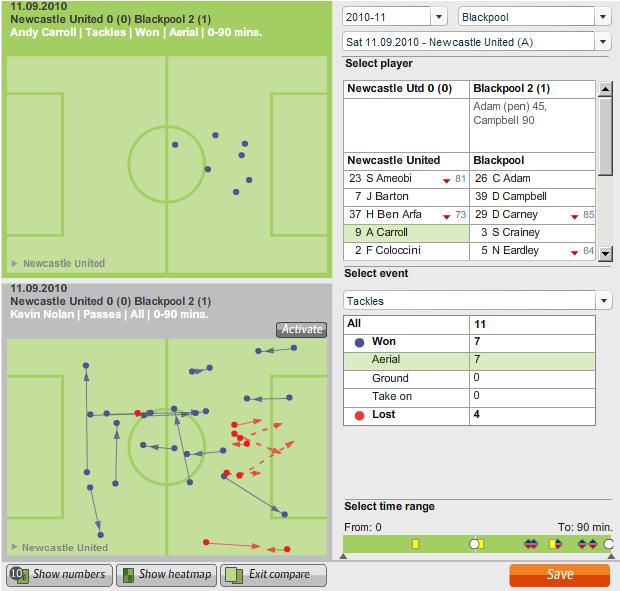 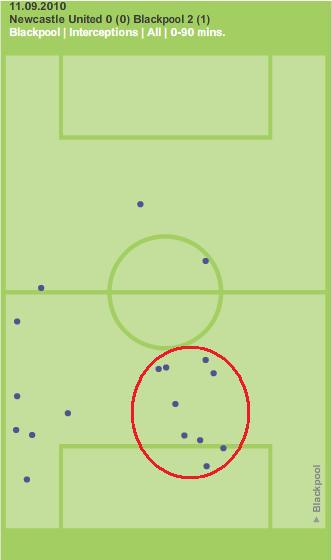 Those are my quick insights on the opening four games of the season, the next four games provided tons more excitement for Tangerine fans and I shall post some more snapshots from those four games and maybe a little more depth about a wonderful performance at Anfield. 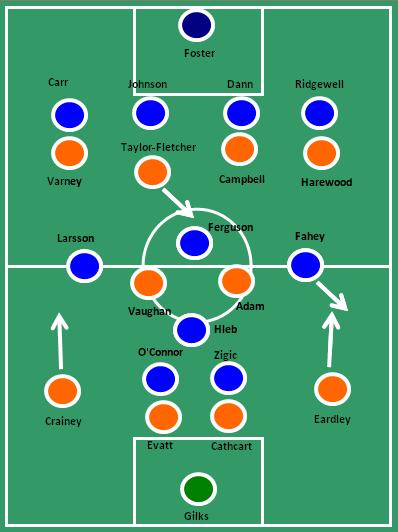 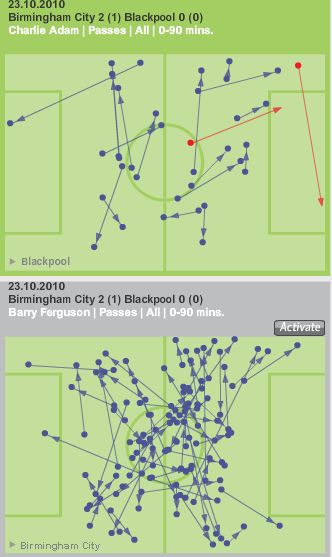 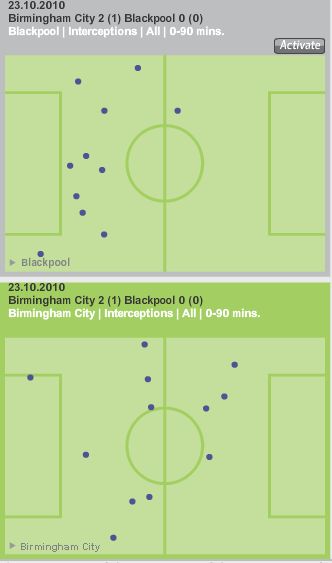 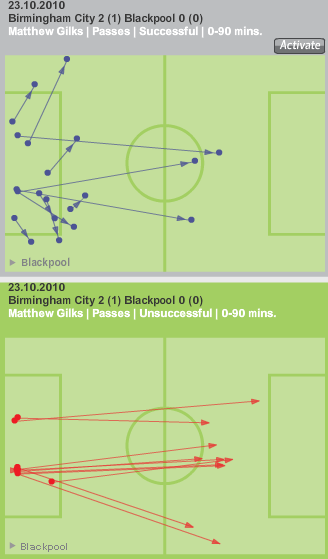