Blackpool took the three points again from a side who supposedly have better players and made pundits come up with the ‘breath of fresh air’ phrase yet again. In a couple of ten minute spells in either half Blackpool played superb, controlled, passing football, moving Stoke around the pitch and carving out chances. While Stoke played to their strengths from set plays and came very close to breaking the goal line. 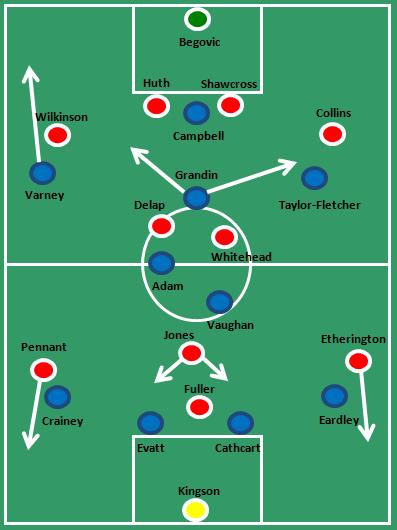 Blackpool stuck with the same starting eleven from the Bolton game two weeks ago, whilst Stoke welcomed back Andy Wilkinson and Jermaine Pennant back from injury and took their place on the right hand side of Stoke’s formation with Robert Huth moving back in to his preferred centre position, Jon Walters and Danny Higginbotham dropped to the bench.

Stoke’s shape remained in a rough 4-4-2 throughout the first hour and only once Tuncay was introduced did they have any variation as he dropped in to something more like a midfield three and with the final throw of the dice, Pulis opted to take off a defender for a midfielder and go to a back three. From the Blackpool perspective, the only noticeable change was a subtle one in midfield with David Vaughan sitting deeper in front of the centre backs, presumably to pick up Kenwyne Jones as he withdrew from the front line.

Another interesting observation from the average positions above is that DJ Campbell (39), due to his dropping deep to receive the ball, held a deeper average position than Elliot Grandin a member of the recognised midfield unit. This gives Blackpool a platform to attack from and Campbell with generally pass back to Adam or look for little passes or flicks for Grandin to run on to.

The first half was an even affair with chances for both sides, but as mentioned in the preview a moment of magic from Ricardo Fuller could have given Stoke the edge. Prior to that Blackpool dominated possession as Stoke’s midfield appeared to be dropping deeper and deeper. Earlier in the game Stoke worked hard to deny space to Blackpool’s midfield and it worked well as Blackpool started to misplace passes. However, once Stoke backed off Blackpool operated well in the spaces and played between their lines well, got good width and constructed some excellent overlapping passing moves especially down their left flank. Stoke’s main threat came from set pieces, although Blackpool defended poorly at times, failing to pick up men in the box and giving too much time and space for Fuller to hit the bar.

The second half started with Stoke almost making the breakthrough, but it was Blackpool who actually did and Charlie Adam was again at the heart of the play and as mentioned a few weeks ago, if Blackpool can get the ball to DJ Campbell close to the 6 yard box with the ball at his feet he will generally get his goals. Stoke were guilty of letting Campbell get that close and will be unhappy with that. Blackpool had some great control of the ball for a period before Stoke tried everything to get on level terms and sharp keeping, goal line clearances and the bar ensured that they failed to find the net.

Charlie Adam was the focal point of most of Blackpool’s play, he attempted more passes (63) than any other player on the pitch, however, his success rate was low (66%, the team average was 72%), but that is mainly due to the fact he is given the freedom to try the unique which sometimes works and sometimes doesn’t. Stoke allowed him too much space at times and Adam will revel in that as the more time he has, the more time he had to vary his pass direction. Earlier in the season he developed a left leaning bias to his passing that made him readable, however, a look at his chalkboard shows how penetrative his passing was and how much variation in pass direction there was. His ball for the Grandin chance on  39 mins was sublime as was his passing in the lead up to the goal.

An article by Zonal Marking last week introduced a concept called the ‘central winger’ and it appears that this might go some way to explaining what Holloway sees Grandin’s role to be. He certainly isn’t a traditional playmaker and at his previous clubs he has been played on the wing. When looking at his chalkboards then you can see he drifts to the wings and this was central to some of the excellent passing moves that Blackpool constructed in the wide areas. Given that Grandin’s last two performances have been excellent, could it be that he has learned the role that Holloway wants him to play? If so, is this important for opening up space for Adam to move in to and operate?

Blackpool dominated in the pass having attempted 112 passes more than Stoke. The danger for Stoke is that they played in to Blackpool’s hands, Blackpool attempted 445 passes with a 73% completion rate. The teams that have stopped Blackpool passing the ball with a fluency have had the most joy against them (Blackburn worked hard to ensure that Blackpool completed only 67% of passes). Give them the ball, time on the ball and Blackpool have proved that they will create chances in the Premier League. Stoke mainly hit long balls from the ‘keeper as Bolton did the other week and had little joy from that approach, however, Stoke know their own game and are happy to play it. With two central midfielders (Combined, Whitehead and Delap attempted 61 passes, added to this 10 of Delap’s passes were his throws, which were largely unsuccessful) passing with such low amounts means that they have to over rely on the wingers to set up play in open passing moves.

Blackpool move in to the Christmas period with a great 16 games behind them. Christmas looks like it will be a tough period and the time when the tiresome pundits will roll out the ‘injuries and suspensions’ nonsense as the next test for Blackpool. Charlie Adam is suspended for the Spurs game and Blackpool (according to www.physioroom.com) already have 6 players out injured, so we shall see. However, should Blackpool have at least another three points come the end of the first week of January then everyone at Bloomfield Road will be set for a second half of the season that will be as exciting as the first.