The final game of the season and the champions host Blackpool in what could be their last Premier League game. The outcome of this game alone will not necessarily control Blackpool’s destiny unless the Tangerines achieve the impossible and win at Old Trafford.

Given that Sir Alex Ferguson may well rest several of his players in advance of their Champions League final against Barcelona then their line up is a matter of guess-work. However, after the possible line ups have been introduced, this article will focus on some of the theoretical battles that may emerge during the game that may well go a long way to deciding if the Tangerines are still dreaming come the start of the 2011/12 season.

The Manchester United line up is going to be tricky to call and as a result, their shape difficult to fix. The suggestion above sees their shape being a loose 4-4-2 with Michael Owen and Dimitar Berbatov up front. Quite possibly Darren Fletcher may come in to the centre where his energy would benefit a 4-4-2 against a 4-3-3. Nani may well line up on either flank, but wherever he lines up it can be taken as a given that he will push forward and attack. If Anderson plays then his role may well be pivotal to their approach. Should he sit narrow as above then that will help Man United match up against Blackpool’s midfield three, the teams who’ve done something similar against Blackpool’s 4-3-3 have had the most success this season. Ian Holloway will play the eleven who started the match against Bolton in his usual 4-3-3 with his new-found flatter shape in midfield.

It is possible that both teams will have the same attacking philosophy and the game will be wide open with play stretched across the length and width of the pitch allowing space to open up everywhere. Holloway may ask his full backs to commit to the attack and in addition, his centre backs to step up and launch attacks. In fact Blackpool will go all out for a win in this fixture, Holloway will not be thinking of a cagey opening 20 minutes keeping things tight and building from there. That just doesn’t happen with this Blackpool side. Ferguson might have a loose strategy within this game. An emphasis on attack, yes, but perhaps he might ask the likes of Darren Fletcher to rehearse patterns of movement that might be explored in the Champions League final. He might be happy for Patrice Evra to progress forward for left back and ask his centre backs to cover for him.

This article will now pick out three battles that might prove pivotal in the final breakdown.

Battle down the flanks

Both sides will utilise their wide men to break down each others defences, however, it is the application of Blackpool’s full backs that could be crucial. Under Ian Holloway Blackpool’s full backs have progressed in to attack on many occasions and as Blackpool go on an all out attack in this game then Stephen Crainey and Neil Eardley will progress high up the pitch. This will present a problem for Blackpool as it has done on occasion this season. As you can see below Manchester United might try to work a position for a midfielder to exploit through balls in behind Stephen Crainey to release Nani, who in turn will be in the perfect position to find his forwards in the box. 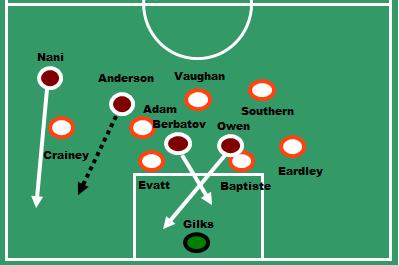 Holloway will be well aware of this threat and he could counter this basically, by asking his full backs to recover their position quickly and for David Vaughan and Charlie Adam to track back and support from midfield. However, he may well ask his full backs to attack relentlessly so that Ferguson’s wide men are running back to their own goal more often than not. This ploy hangs off Blackpool being able to gain a foothold in the midfield first in order to set up attacking plays which leads on to the next key battle.

As most observers will know, Charlie Adam has had a good season for Blackpool and has created and scored goals all throughout the season. When he has struggled it is because teams deny him the space to work on the ball. Ferguson might field Darren Fletcher in the centre of midfield to close down that space to panic Adam and hurry him up in to making mistakes. Ferguson might do this to assert control in this game, but he might have very specific plans for Fletcher (fitness withstanding) to take in to the Champions League final to counter Barcelona’s fluid midfield.

If this doesn’t prove to be the case and Adam settles in to the game and finds his passing rhythm, he will attempt his long diagonal passes and he will also be a threat with his set piece delivery. However, he will look to break in to the attacking third down the left side. With the support of Stephen Crainey he can build himself in to one of his favoured positions to deliver deft balls over and in between the defence to release DJ Campbell through on goals. You can see this demonstrated below.

This was the position that Blackpool built themselves in to last week against Bolton and Manchester United’s defensive line will have to be alive to this threat and not get caught on their heels like Bolton did last week.

One of the observations of the meeting between these two teams at Bloomfield Road was the intelligent movement of Berbatov. He appeared to work himself in between the right full back and right-sided centre back. At the time of the game Blackpool were suffering when teams attacked their right back area, so it might have been a game specific plan, but more likely it is down to Berbatov’s instinct. This is again something that Blackpool will have to be wary of and as a demonstration of the point, you can see how it might look below.

Berbatov will keep moving and should he peel off the shoulder of a defender in to space, then it will may well be a ball from deep that he latches on to. Blackpool’s defence have struggled to read teams that play clever balls from deep and they will need to be alert to the threat that when that happens, Berbatov will be on the move and will have to be tracked. Paul Scholes will look to put on a passing masterclass and he averages eight long balls per game and it is likely that the Scholes/Berbatov combination could prove lethal.

This will be a tremendous game, Ferguson may well see this as a chance to rehearse some set moves against a team that line up in a 4-3-3, which could be useful for their Champions League aspirations. Blackpool on the other hand will try all game long to keep scoring and win or lose this game, they will not necessarily fall. If Blackpool do fall, then it will be with their heads held high and with a very proud set of supporters who’ve enjoyed a season that they’ve been dreaming about for years.

Check out previews from a Manchester United perspective over on;

Can they score? – Preview