Blackpool tried to hold on to a lead donated to them by a freak goalkeeping error, but in the end they invited a strong Southampton team on to them and who duly equalised to rescue a point.

Ian Holloway made one change in dropping Lomana LuaLua to the bench and bringing in Chris Basham in to midfield. Whilst Nigel Adkins brought back Rickie Lambert from injury to lead the line and Bartosz Białkowski for the injured Kelvin Davis in goal. 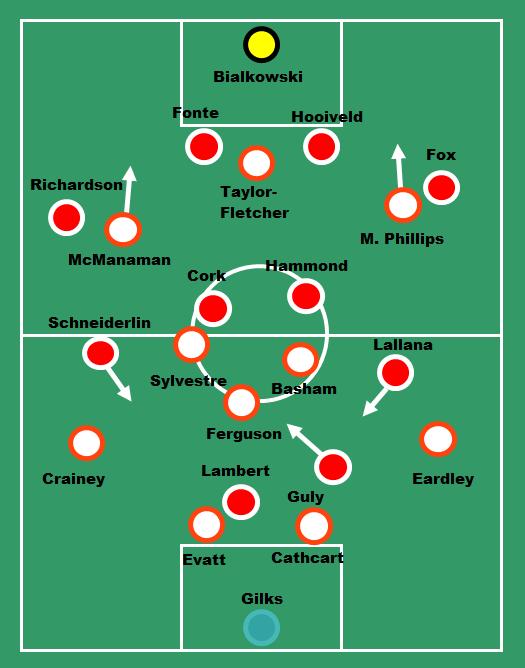 Blackpool set up in their 4-3-3 with Basham adding extra bite and cover in the midfield. Southampton on paper looked like a rough 4-4-2 but with plenty of fluidity about it. Both their wide men cut in, their central midfielders sometimes split and Guly Do Prado dropped off Rickie Lambert to receive the ball in between Blackpool’s midfield and defence.

Blackpool appeared to set up to counter when under pressure and to assert themselves on the ball should they win it higher up the pitch. This was initially aided with pressure being applied high up the pitch, trying to throw out Southampton’s passing moves from defence.

Southampton appeared to be happy to allow Blackpool the centre ground and go around them and with a mixture of short and long passing. They were aggressive in attack and had plenty of drive from their midfield to run beyond attackers and in behind the defence. They focused their attacks on and around Lambert, using him to set plays up as well as to bully the Blackpool defence and force them deeper.

The first half swung from Blackpool to Southampton and then back to Blackpool again as both teams enjoyed periods of dominance. In truth, Southampton had the best of the chances in the first half, but their defensive work was unhinged by the mistakes being made by Białkowski in goal. His nerves or even lack of alertness caused gave Blackpool more joy than they perhaps should have had and Southampton’s back line seemed a little thrown off by that. The mistake by Białkowski for the second Blackpool goal seemed to throw the game in to a stunned state before Southampton started to chase the game.

Blackpool at times used the ball very wisely, however, as the game wore on the ball started to come back to them all too often as they lacked a genuine out ball to set up counter attacks or field position. When Blackpool enjoyed their best spells they were usually aided by strong running on and off the ball by Matthew Phillips and Callum McManaman which stretched the play, pushing the Southampton defence back, creating space for Blackpool’s midfielders to step in to and receive the ball.

Southampton looked more fluent when Adam Lallana stepped inside and forward to join the attack. However, to Blackpool’s credit that happened very little, however, when it did, he caused them a lot of problems. The first goal came from Lallana pressure and link up play. What was noticeable about Southampton off the ball was the inconsistency of their pressing. They didn’t seem to press with a consistent intensity or in consistent patterns. If this was intentional then fair enough, however, it would be strange if that was the case. When they stepped up their pressing before the first goal it really appeared to catch Blackpool out who found their space shut out and struggled to work in the tighter spaces.

Holloway’s team conceded late on in the game, but in truth they invited it. If it was a conscious decision then it was only executed in part. The key in such situations is to do the basics well, blocking, tackling, keeping shape etc, but it’s vital that the pressure can be eased with ‘outballs’ that remain up the field of play for as long as possible. In this case Blackpool struggled to lock down their out balls, either through poor distribution or hold up play. The net effect was that Southampton were in receipt of the ball time and time again, giving Blackpool more and more pressure to handle.

Southampton are a top Championship side and it showed in this game. Their goalkeeping issues aside (assuming Kelvin Davis isn’t out for too long) they have everything they need to be promoted. Defensively sound, but it’s their attacking options that sets them apart. Admittedly a lot of their plays hang off or come through Rickie Lambert, but they aren’t entirely dependent on him. They have excellent variety to their game. They can pass short and long in all areas, they can build play and have players to thread short balls in the final third, but will go long from front to back to exploit the aerial qualities of Lambert. They vary their player positions to suit themselves, in this game alone there was a lot of position switching within their framework.

As attacking plays go they have some great pre-set moves. As good example of this is the long ball from full back or centre back to the head of Lambert who will flick on to an oncoming wide midfielder cutting in. It’s hard to track the midfield runner and Blackpool struggled at times. When Lambert executes his flick well the opposition defence is turned around in an instant and the goal is exposed.

In this game they also had another element to their attacking play and that was the movement of Guly. He drops off deeper to receive the ball to feet which helps to vary their focus of attack and he can start short passing movements with support from the central midfielders, but also from Lallana who will drift inside to receive.

There may be questions over their dependency on a couple of players, but that is clearly a risk worth taking as they appear so strong in utilising them well. Should Lambert get an injury that keeps him out for a long time then perhaps they may struggle, but with such variety to their game they should cope.